Announcement made on National Heroes’ Day, four months ahead of target 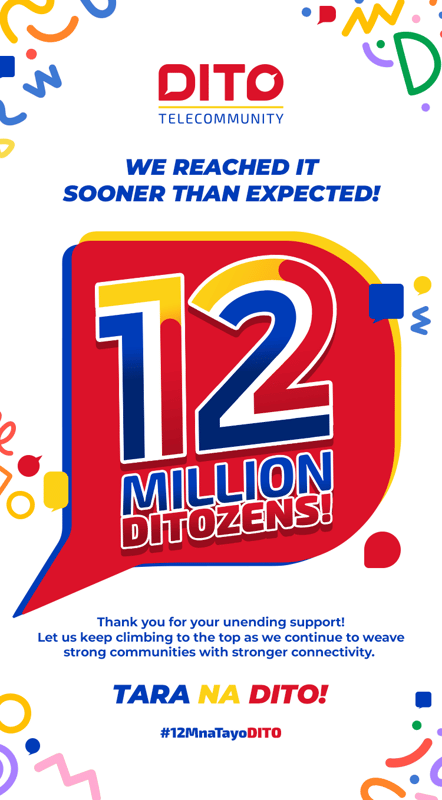 Taguig City, 2022 August 29 – The country’s fastest growing telecommunications provider DITO Telecommunity continues to raise the stakes in the highly competitive telecom sector as it attained its 12 million subscriber base as of August 26, 2022.

The telco player set this target by year-end but managed to attain it in less than a year and a half, consistently surpassing set milestones since it began commercial operations in March 2021.

“The overwhelming reception we get from DITOzens has always served as inspiration. Their unwavering support has continued to motivate us to remain committed to our promise of providing every Filipino better, stronger, and more affordable connectivity they deserve,” according to DITO Telecommunity Chief Administrative Officer Adel A. Tamano.

The company also pointed to the speed of its network rollout as contributing to its rapid subscriber growth. With more than 5,500 cellular towers built, DITO Telecommunity has increased its coverage to over 600 cities and municipalities and has effectively breached its 70% population coverage target.

“As we continuously ramp up our presence throughout the archipelago, we also are deploying with continuous testing of our 5G capability coupled with high impact and high value retail offerings based on consumer demand,” said DITO’s Chief Commercial Officer Evelyn Jimenez.

“We are grateful for our subscribers’ continuous trust and support, and we are pushing hard to create avenues and opportunities for them to indulge even more in the DITO experience,” she continued.

Since the company’s inception, DITO started offering and empowering its customers with next-gen technology by providing stronger and more optimized connectivity leveraging in world-class digital infrastructures and technologies. DITO made its debut by deploying a standalone (SA) 5G network nationwide, making its architecture 5G from the ground up. Other telco players that preceded DITO may have deployed 5G in the country first, but theirs is a non-standalone (NSA) 5G network still assisted by their existing 4G infrastructure.

“Since we started our roll-out in 2019, we have been developing our (SA) 5G network. Our goal has been to allow Filipinos to experience next-generation technology and we in DITO are excited to bring 5G to more areas in the country to truly transform digital connectivity and online interactions,” said DITO Chief Technology Officer Rodolfo Santiago.

DITO's 5G technology provides greater capacity, wider coverage and faster internet connection speed which is 20 times faster than 4G.
Aside from stronger internet connectivity, DITO also prides itself in providing both VoLTE and ViLTE to its consumers. Through VoLTE and ViLTE, customers can enjoy clear phone calls while maintaining fast data connection and enable video calls without the need for video calling mobile applications, respectively.
Among DITO’s retail products are Level Up plans that are the most affordable in the market, starting at P99 with 7 GB of data, P199 with 16GB, P200 with 28GB, P499 with 55GB, and P999 with 120GB. Valid for 30 days, these plans also provide unli DITO to DITO calls, 300 minutes of calls to other mobile networks, and unli texts.
The company also provides DITO Data Sachets that lets current and new subscribers enjoy high-speed, all-access data for as low as P10 with 1GB of data for one day, up to P50 with 5GB of data for up to seven days.

Likewise, DITO’s 5G Home Wifi continues to attract a growing number of users. As of August 2022, the service has expanded to over 600 municipalities and cities in the greater Metro Manila area, providing speeds of up to 500Mbps for as low as P590 per month.

With now 12 million subscribers, DITO also continues its strong commitment and vision to bringing Filipino communities together by providing stronger connectivity and weaving telecommunities with shared interests and passion.